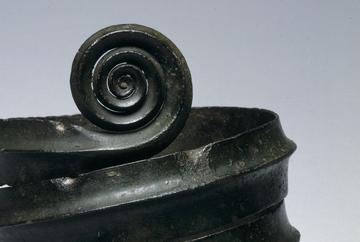 In the Theoretical Archaeology stream you will benefit from the teaching and supervision of specialists who are engaged with the examination of past and contemporary heritage dynamics and the theoretical and applied interpretation of material culture from multi-focal perspectives.

The stream focuses on one of the most vital areas within archaeology: theory and interpretation. You will engage with both established and new theories that are at the forefront of the discipline, including New archaeology, post-processualism, new materialism/animism, and post-colonialism. Case studies will be used to explore major theoretical trends and to assess how they have shaped the development of the discipline. You will have the opportunity to research and debate how relevant these theories are to archaeological subject matters and problems and to think how you might want to shape future theory.

Your taught modules and independent research will allow you to deepen your knowledge and understanding of the ever-changing world of archaeological theory, and the historical and academic contexts in which theoretical trends develop.

The small-group teaching and learning provide you with the opportunity to explore key sources of evidence and approaches from around the world in order to investigate a wide range of subjects, such as:

Students benefit from the world-renowned collections of the Bodleian Libraries, Pitt Rivers Museum, and other resources.

You will take one module from List A, and one or two from List B. You will also take the Archaeological Principles module, and complete a 15,000-word dissertation on a stream-related topic.

If you take only one stream module from List B below, you may take another module offered from either: List B in any other stream*; the MSt in Classical Archaeology*; or a subject from the MSc in Archaeological Science*.

*Not all offered every year

One of the most vital areas within archaeology over the last forty years has been the debate concerning method and theory. Archaeological theory has shifted from the attempts to generalise about human life developed by the New or Processual archaeologists from the 1960s onwards. In the late 1970s there was a reaction against grand theory and a greater concentration on local prehistoric sequences and the finer details of people's lives by the so-called post-processualists. Today there is a huge range of archaeological theories in use, focussing on issues of identity, gender, mind, material culture, art and aesthetics, as well as the more traditional questions of technology and subsistence. Archaeology has drawn on a huge range of theory from outside the discipline, ranging from evolutionary and ecological theories, post-modernist and post-colonial theories, feminist and gendered perspectives and theories of history and change. How relevant any or all of these theories are to archaeological subject matters and problems is debatable, but these are subjects that need debating if we are to decide the most profitable and productive directions for archaeology. Recently, archaeological method has become a source of intense debate, looking at how social and intellectual factors influence the ways in which archaeological sites are excavated and interpreted. Excavation and analysis are not purely technical matters, but have great influence on how we create our basic forms of evidence and make sense of them.

Loosely following a chronological line, this option will first survey later 20th century archaeological thought, starting with the notions of culture history, processual and post-processual archaeology. This survey of theories and methods will then form the backdrop to a more detailed engagement with theoretical developments since the late 1990s and leading up to the state of archaeological thinking today.

Colonialism has been the dominant element of world history for the last five hundred years and an important aspect of world history for the last 5000 years. The legacy of colonialism is pervasive in today’s societies and archaeology has much light to throw on colonial forms past and present, complementing written accounts and oral histories. A comparative approach to colonial past and present is taken in this module, drawing on perspectives from post-colonial theory, anthropology, world-systems theory as well as archaeology. Material culture from archaeological sites is an important source for the study of colonialism, but so too are museum collections and archival materials. Through its concentration on the material aspects of human existence archaeology has a unique perspective complementing those drawn from many elements of post-colonial theory which do not consider the material world in any great detail. The case studies considered cover diverse geographical areas and time periods. These range from (and are not limited to) early Mesopotamia, Greek settlements, the Roman Empire, the Incas and Aztecs, colonialism in Latin America post-1492, evolution of Swahili settlements in East Africa post AD900, European settlement along the Atlantic coast of Africa and colonialism in Africa post-Berlin Congress of 1884/5.

Cognitive archaeology is a fast-growing field of research dedicated to the comparative study of human cognition from a material culture-perspective. In particular, cognitive archaeology brings together three major related specializations: 1) the study of the biosocial origins and evolution of human intelligence (broadly known as Evolutionary Cognitive Archaeology ECA), 2) the study of the unity and diversity of the human mind (past and present), and 3) the anthropological and experimental study of the interaction between cognition and material culture. The proposed option integrates all three major specializations bringing together the archaeological, the anthropological and the evolutionary dimensions of cognitive archaeology. It offers a critical synthesis of major issues related to the social and bodily dimensions of human intelligence and especially the effects that the changing socio-material environment (artificial or natural) has on humans and upon their minds. The major aim of the option is to explore the nature of the relationship between cognition and material culture—what it is, how it changes, and what role observed transformations in human societies play in forging those links. Using a variety of archaeological and anthropological themes and case studies the option will offer a comparative examination of the impact of material culture on the making and evolution of human intelligence (brain and body) from its earliest beginnings to the present day.

Archaeology of the Contemporary World

The module ‘Archaeology and the Contemporary World’ considers the place of the discipline of Archaeology in our contemporary world.

This module will introduce aspects of the history of Archaeology, read through the lens of contemporary global, social, intellectual and political concerns. Through lectures and seminars, the paper explores the discipline’s past not so much as history but as tradition, and not as changing theories or methods but as enduring practices and structures. The aim will be to undertake close readings of significant texts from the disciplinary past and to bring them to bear upon contemporary social and cultural questions facing universities, heritage bodies, museums, and the world today.

Themes such as Humanity and Objectivity; Decolonisation and Anti-colonialism; Museums and Visuality; Conflict and Violence; Landscape and the Environment; Time and Duration will be covered during the teaching.

Please note that the modules and streams listed on this website are indicative of the typical offerings and are subject to review each year. Whilst every effort is made to offer the full variety of modules/streams this is not possible to do every year. This is due to the fact that some modules/streams are dependent on student numbers to ensure an appropriate quality of education; timetable clashes; staff availability; etc. We aim to keep the website as up-to-date as possible but we recommend that you seek specific advice from pgt-support@arch.ox.ac.uk on module/stream availability.