Medieval Migrants of the North Sea World is a Fell Fund-supported project led by Dr Letty ten Harkel and Co-Investigator Professor Helena Hamerow that is synthesising human skeletal data from excavated medieval cemeteries from countries around the North Sea, in particular England, the Netherlands and Denmark, in order to understand the scale and impact of human mobility on this key region during the Middle Ages. It is envisaged as a pilot project in preparation for a larger study involving stable isotope, ancient DNA, and radiocarbon analyses of skeletal materials from multiple countries. Employing Eleanor Farber as a PDRA, with partners including Dr Sarah Croix at the University of Aarhus, Denmark, and Dr Raphaël Panhuysen in the Netherlands, this project is the first step towards a major international collaboration.

The medieval period is often seen as a time of expanding elite powers and contracting peasant rights, punctuated by periods of disruption and migration such as the post-Roman ‘Migration Period’ and the later Viking period. This viewpoint is largely based on the study of artefactual material, despite acknowledged difficulties in equating ‘pots’ with ‘people’, but it is increasingly challenged by a more nuanced approach, aided by recent developments in scientific methods used to analyse archaeological materials and human remains. Recent excavations of important medieval centres including sites at Ribe (Denmark), Lübeck (Germany), and Ipswich (England), have also increased the amount of information available for analysis.

We can now begin to address whether migration and mobility were more widespread and continuous in the medieval period than previously imagined. With the ability to analyse large datasets using multiple scientific and archaeological methods, it is now possible to approach the question of migration in the North Sea zone on an international scale. 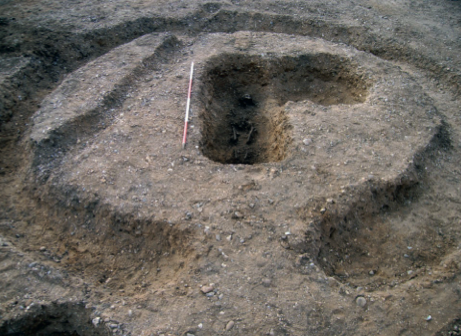 This pilot brings together historical, archaeological, and scientific expertise from three countries to analyse the ways in which medieval communities engaged with and traversed the North Sea. Existing data from cemetery sites in England, Scandinavia and the Netherlands, c. AD 600-1500, is critically assessed and synthesised, allowing for a long-term perspective from the foundation of the emporia (post-Roman trading ports) to the formation of powerful trade groups including the Hanseatic League. The project will include both bioarchaeological data and other contextual data such as grave goods, grave furniture and burial rites. This will also allow for a comparison between ‘biological’ and ‘ethnic’ identities.

During the pilot, a database will be designed and select data from a number of cemeteries in England, the Netherlands and Denmark will be collated and analysed. Not only results, but also different analytical approaches will be analysed to ensure that different datasets are comparable. Areas for further study will be defined in order to produce a strong application to fund future bioarchaeological analyses.

If you have any questions about the project, please do not hesitate to contact the team.